Spinal Nerves Above and Below the Intervertebral Disc

Spinal Nerves Above and Below the Intervertebral Disc 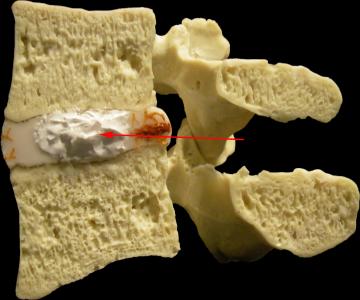 In a recent publication by one of the world’s leading spine researcher, Lotz et al. used some very modern techniques to visualize the nerves above and below the disc. In the paper titled: Innervation of pathologies in the lumbar vertebral end plate and intervertebral disc, these researchers looked at the density and locations of the nerves that reside in the endplate and disc. The disc has been long known to have nerves in it but the endplates, which sandwich the disc, have not been investigated as thoroughly up until recently. The endplates consist of hyaline cartilage, just like other syovial joints in the body, and they also have nerves at perimeter of this cartilage.

As compression is exerted on the spine, the disc pushes radially but also in a north-south (up/down) fashion into the vertebrae. We know from other research that the vertebrae flex substantially and push into the endplates. When the endplates are damages from either an injury, overuse, or other pathology, the patient will experience pain in the upright loaded position. This can be in the form of sitting, standing, or bending. Chiropractors will often see these types of patients presenting with the complaint of back pain and very often unloading with the use of their arms. Using the arms to push down against gravity will often decompress the spine and decrease the pain. A definitive test is a bone scan which can be ordered to see if there is active inflammation in the region.

New strategies are being developed to treat painful endplates. Relievant is a technology that is being developed and very close to be available in the US. To give a little history and understanding of this ablation type surgery, for many years kyphoplasty ( a form of injecting bone cement in fractured vertebrae ) was thought to be helping people because of the cement itself. But they are now finding out that many of these people get great surgical outcomes not because of the structural improvememnt of the bone and the cement, but because the nerves are being killed. It is kind of line a root canal procedure. So now, in those select patients, they are going in surgically and ablating the nerves to the endplate. This main nerve is called the basivertebral nerve.

The trick will be to hand pick those back pain patients out from the population of back pain sufferers. Bone scans along with new understandings in MRI will help us get better at identifying those who have symptomatic endplates.