Bed Rest and its Bad Rap

In the late 90s, bedrest was proclaimed bad for bad backs. A decades-long push ensued to keep people active to avoid deconditioning; however, I knew a good night’s sleep ‘fixed’ many types of back pains. In addition to this, as a chiropractor, I often saw that most back pain would temporarily go away when one lay down on the table. So to me, keeping people vertical for extended periods just did not make a whole bunch of sense for certain low back pain issues, especially when there is accompanying leg pain with the back pain. I could also see people with back pain problems using walkers, canes and crutches to naturally take the load off.

Over the years of clinical practice, I discovered that short bouts of recumbency throughout the day can actually be more active to a disc’s health. I saw this clinically and experimentally1 and often prescribed the act of bedrest in many low back cases related to a compression/spacing problem, especially in the case of back and leg pain.

In More Recent News – A Review on Bed rest

After exchanging a few tweets with fellow tweeters, someone shared a more recent paper on bed rest, written in the Journal of Orthopedic Sports Physical Therapy2 where the authors wrote:

“First, there is a paucity of studies specifically investigating bed rest as part of managing radiating leg pain.”

This, to me, started to make some better sense. It is often the way in medicine, where a series of observations are seen and written about, a groundswell of announcements can emerge through the media without a careful look at the science. In this case, for years, I had prescribed bed rest for short bouts and helped hundreds of people with pain while all the while looking like I was contrary to the literature. But after reading this paper, I realized that there is more to it, and my hunches weren’t wrong.

Why do I suggest lying down for back pain?

One of the big themes I work with is promoting nutritional flow and waste removal at the tissue level. However, the spine has many spaces where nerves (and blood vessels) travel through with tight quarters. On top of that, in the case of osteoarthritis-driven pain, subchondral bone (the bone under the cartilage) can often be the sore spot. Taking the pressure off these structures can be relieving, like in the case of hip osteoarthritis, where people prefer to sit—unloading the hip joint.

When it comes to the spine, the disc dynamics have the greatest return if one is to target a structure to have the largest therapeutic impact.

Over the last several decades, the emergence of keeping active with back pain has surfaced over and over, with many papers citing this. But to keep the disc active in height, one has to look carefully at the dynamics of the disc and its day-night changing geometry. Let me explain a little more.

In the graph below, time is on the horizontal axis, while disc height (in mm) is on the vertical axis. As you can see, it is a curvy line. One can divide the two asymptotic lines into two distinct loading environments. At the beginning of the graph on the left, you can see a steep rise in disc height. This is the disc heights gained upon first lying down after being vertical for the day. In the first ten minutes, the height gains are very quick; after that, the discs slowly fill with fluid and continue to gain height. 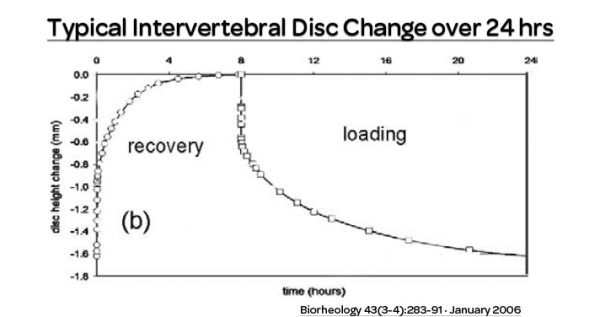 Similarly, you can see a steep decline in height in the middle of the graph. This is what happens to the discs when they are first loaded after a night’s sleep. One can see how steep the curve is and can be accompanied by morning pain and perceived stiffness in certain low back pain cases. Save

I want to make an important point about this graph: how steep the curve is when the discs are first unloaded. If keeping the discs active is a priority, this should be taken seriously. This bed rest moment provides the greatest ‘activity’ of the disc when it regains its height lost from gravitational compression.

How did I pick up on this simple strategy?

In 2008 I led a research paper published in The Spine Journal. I was excited about an unloading strategy that I had come up with to help those with back pain in and around the act of sitting. However, it was during the creation of the protocols that was unforgettable to me. As I crafted the methodological approach to measure the unloading exercise within-subjects in Scotland’s Aberdeen University, I packed a stadiometre to the first-ever Upright MRI centre. I was curious about whether I could see disc height gains with chair-care decompression exercise. My protocols involved measuring people under the stadiometre, before and after the exercise, to see overall stature height changes and compare that to the MRI within the same subject.

As a rookie researcher, I was not aware of all the dynamics of the discs. Dr. Francis Smith, who is a prominent spine researcher and the first owner of an upright MRI, cleverly suggested that before I place the same subject into the MRI after I had conducted the first phase of the experiment, I have them lie down for 10 minutes to neutralize the disc height.

This was so interesting to me that it took only 10 minutes to significantly increase a disc’s height.

At that point, I was so taken aback; even though I saw this previous research, it didn’t dawn on me. But after that simple protocol suggestion, the spine’s dynamics became even more clear to me.

If one wants to keep the disc active, unloading it must play a role.

Back Pain and Leg Pain

So, in the case of managing back pain patients, when I believe that disc height loss is playing a role in congesting the critical spaces for the nerves and vessels, I often recommend short bouts of recumbency. I often advise them to ‘get on your back’, take the load off, and maximize the spinal spacing for no more than 10 minutes. Find a position that relieves the symptoms. Rest there knowing that your disc heights are increasing and you are growing taller by the moment. Visualize it too. And when you are upright, be mindful of the compression as it relates to your pain. Give your biology the space it deserves to recover. No one likes to be cramped for space, including your tissues. 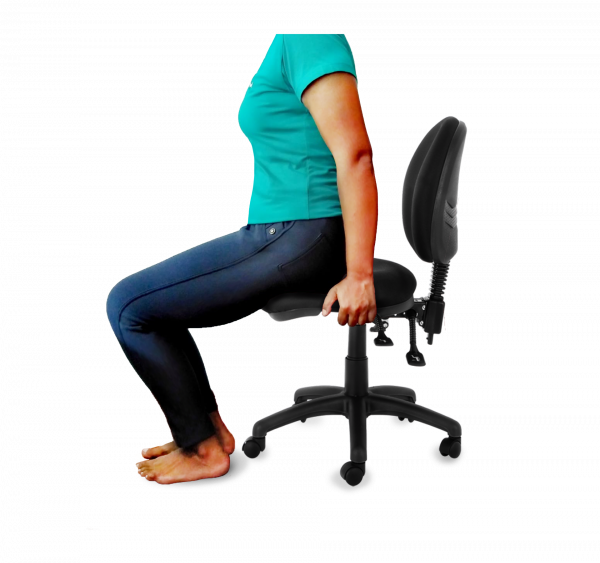 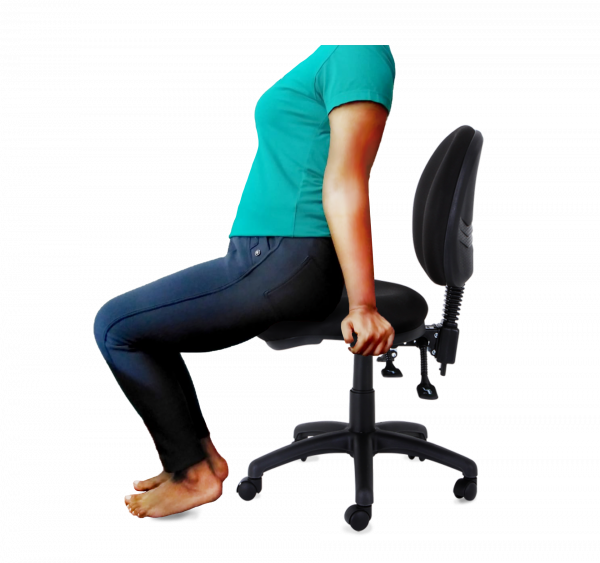